The book of science

The logo is an abstract representation of a benzine ring using John Dalton’s symbols for hydrogen (circles with dots) and carbon (circles with gray centers).

Generally, each posting presents three poems on a scientific milestone, considered broadly. The first narrowly describes the milestone in the history of science, the second broadens the scope in some way, such as biographically or culturally, and the third usually develops a connection with my own life or considers the idea in a metaphorical and unscientific perspective.

The main arrangement of milestones is chronological; however, I have not tried to establish the day or month of any milestone, so I have typically put milestones for the same year in the order that I wrote them.

This is a big book, too long for a book of poetry. So far, I have written 2054 poems covering 647 scientific milestones, referencing the work of 1035 scientists. (I haven’t published all these, yet.) Therefore, one might ask, “Why have I done it?” “Why didn’t I stop sooner?”

When I started writing this book, my education in science was more limited than my interests in the area. That is still true today; I have so much more to learn. Also, I had often found that having a use for my reading resulted in better learning, so my writing about milestones of science resulted in better retention.

As for several of my books of poetry, I chose a scheme to provide subjects and ideas. For my One Hundred and One Famous Poems, there were only 111 poems in Cook’s anthology, upon which each of my poems are based. For my The Great Ideas, Mortimer J. Adler described 102 great ideas.

For this book, I chose a scheme that also had a limited number of subjects, because I originally thought that I would write about only subjects that were included in The Science Book, edited by Peter Tallack; however, it was too tempting to add other milestones of science, and these did not offer a safe limit. At one phase of the process I resolved to write only about milestones no later than the year I was born; however, there were too many milestones after 1952 that interested me. Now I have begun to feel there are many years left to this work.

The nature of this book is not accidental. The embodiment of principles has sustained my efforts.

About Elements of science

Elements of science expands The book of science with a page for each chemical element. Generally, I followed the same strategy of writing three poems on each element, plus a commentary and related readings.

About The booklet of science

The booklet of science is a subset of the full book of science, minus the pages on the elements, containing only the last one or two of each set of poems on a milestone. 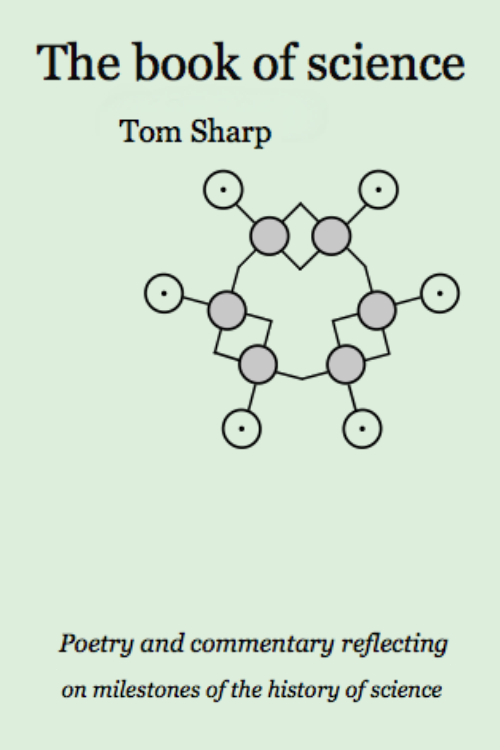 How is this a book?

This book is not printed, but it is, nevertheless, a book.

How to get around in this book

For a computer, with a keyboard and mouse, you can click on these links using your mouse, or you may use the following shortcut keys using the up and down arrow keys:

In addition to the links in the menu bar at the foot of page headers, I have made liberal use of somewhat unobtrusive links, which you can touch or click to jump to related parts of the book. I say these are somewhat unobtrusive because they appear as normal text; they are not presented in another color, and they are not underlined unless you position your mouse pointer over them.

These links appear in menu bars, not necessarily in this order:

This book has multiple indexes and tables of contents:

Links in a row of a table of milestones help you jump to the page about the milestone, to the individual poems and the commentary, to the index by atomic number (for a chemical element), and to the index of scientists:

Links in the index of sciences go to the wikipedia article on the science, to parent or child branches of the science, to the row or rows in the table of milestones, and to the page or pages of poems and commentary.

Links in the index of eponymous science go to the milestone in the chronological table of milestones.

For each milestone page, in addition to the links in the menu bar at the foot of page headers, which help you go to other pages, there are links at the top to each poem and the commentary, to this element in the index of elements by atomic number (for a chemical element), and to the scientist in the index of scientists.

At the bottom of each milestone page, a commentary section has visible links to related milestones in The book of science, to related articles in wikipedia, and sometimes to other readings.

I will be adding a new set of poetry and commentary weekly.

Make a suggestion, ask a question, give encouragement

if you discover an error, have a question, wish to make a suggestion, or would be pleased to encourage this effort.